Liverpool made a mockery of Arsenal’s status as Premier League leaders by handing out an emphatic beating at Anfield. 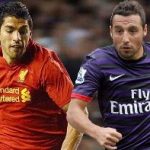 Liverpool have won just one of the last 13 league meetings between the two sides, although seven of those ended in draws (W1, D7, L5).

Arsenal are chasing a third successive league win at Anfield. The last time they managed that feat was between 10 February 1973 and 9 November 1974.

Meetings between these sides have produced more hat-tricks (five) than any other Premier League fixture.

The Reds are unbeaten in their last 10 league and cup games at Anfield (W9, D1), scoring 33 goals and conceding seven in that run.
Daniel Sturridge’s goal against West Brom was his 50th in the Premier League. He is the 10th English player to reach that landmark before turning 25.
Sturridge has scored in 13 of his 16 league appearances this season, scoring 14 in total.
According to Opta statistics, Liverpool have made 29 errors leading to a goal or attempt at goal this season – the most in the top flight.

The Gunners are unbeaten in eight league games (W6, D2) despite failing to score a first-half goal in seven of those matches.
Against Crystal Palace, 10 Arsenal players ended with pass completion rates of over 90%.
Arsenal’s tally of 26 points won away from home is the joint best in the top flight, along with Tottenham.
Arsenal’s Wojciech Szczesny has kept 11 Premier League clean sheets – more than any other top-flight goalkeeper.