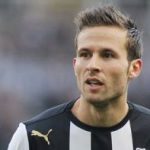 The 28-year-old, who has agreed to a three-and-a-half year contract, completed a medical on Wednesday.

The Ligue 1 leaders had a £14m bid for Cabaye rejected on Sunday but then returned with a larger offer, that could rise beyond £20m.

Cabaye in the Premier League