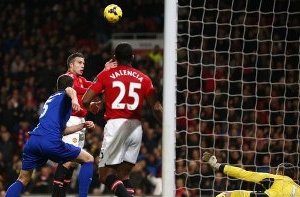 The striker, back after 11 games out, headed home after David Marshall had saved his first effort, moments after Antonio Valencia had hit the crossbar.

Ashley Young sealed the victory in the second half after cutting in from the left and firing home from 22 yards.

Debutant Juan Mata forced a save from Marshall and the keeper then tipped a Valencia shot onto the post.

Cardiff’s last win in this fixture was a 3-0 victory in the old Division One at Ninian Park on 26 November 1960.

The Bluebirds have played 13 league matches at Old Trafford and have won just twice.

Their last victory at Old Trafford came back on 3 April 1954 when they won 3-2.
In 28 previous meetings between the sides.

Manchester United have won 13 times, Cardiff seven and there have been eight draws.

In total, he played 366 games and scored 126 goals in all competitions for the Red Devils. He won six Premier League titles, two FA Cups, one Champions League and one Intercontinental Cup whilst at Old Trafford.

Victory would make Manchester United the first club to earn 1,000 points at home in the Premier League – they currently stand on 998.

Thirty seven points from 22 matches is the lowest total they have mustered in any previous Premier League season at this stage.

They have already lost seven league games, a tally they have only previous exceeded in two Premier League seasons (they lost nine times in 2001-02 and 2003-04).

Against Chelsea in their last Premier League fixture, captain Nemanja Vidic received his fifth red card in the league – only Roy Keane has more (seven) for the club in the Premier League.

Cardiff have won none and lost six of their last eight Premier League away games.

They have conceded at least two goals in six successive league matches, conceding 16 goals. January to April 1961 was the last time they had a longer top-flight run of conceding two or more goals (11 matches).

The Bluebirds have the best disciplinary record in the top flight this season with just 27 yellow cards and no reds.

They have scored 35% of their goals via headers – the highest proportion in the Premier League.

Five of Frazier Campbell’s last six league goals have come against Manchester United or Manchester City, and 42% of his overall total Premier League strikes have been against those two teams.