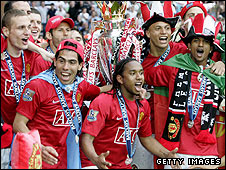 At 1245 BST August 16th 2008, The new EPL season begins, that means kicking off nine months of entertainment and top-class action from the most exciting league in the world.

It is being 97 days after Manchester United celebrated their 10th Premier League crown.

In first match Arsenal take on West Brom. As well as the Baggies, fellow promoted teams Stoke and Hull are in action too, against Bolton and Fulham respectively.

You can see the detailed fixture here.

United, though heavily linked with Tottenham’s Dimitar Berbatov, have failed to sign anyone during the summer, while Chelsea have splashed out nearly £25m on Portuguese duo Deco and Jose Bosingwa.

United will be relieved to start the season with Cristiano Ronaldo still in their ranks after speculation linking him with Real Madrid, though he is out until September with an ankle injury.

Arsenal have added French youngster Samir Nasri and Welsh teenager Aaron Ramsey to their squad, while Liverpool have spent £20m on signing Republic of Ireland striker Robbie Keane from Tottenham.

Hull begin their first-ever season in the top flight of English football after a 104-year wait and boss Phil Brown has been busy adding to his squad, with a further seven names joining Gardner at the KC Stadium.

Stoke, who begin their first term in the top flight for 23 years, have been more circumspect in the transfer market, with Seyi George Olofinjana and Thomas Sorensen joining Kitson as their new arrivals.

The other promoted team, West Brom, will be aiming to cement their place in the Premier League under Tony Mowbray after they were relegated in 2006.