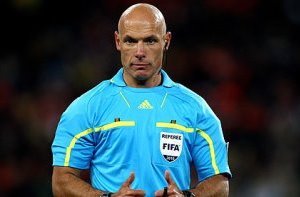 Howard Webb has ended his 25-year refereeing career after being appointed technical director of the official referees’ association.

The well-respected Webb has been England’s representative at the last four major international tournaments and he took charge of his final match at Brazil 2014 when the hosts beat Chile on penalties.

Part-time policeman Webb, popular on the pitch for his authority and straight-talking, puts away his cards having taken charge of more than 500 Barclays Premier League and Football League fixtures since becoming a Select Group referee in 2003.

The 43-year-old began his career in 1989, progressing through the Northern Counties and Football League to become a Select Group referee in 2003.

“I am very excited to start this new chapter in my career,” said Webb.

Webb was involved in nine major international tournaments, took charge of the Champions League final and also officiated in every major domestic final.

During this year’s World Cup in Brazil, he refereed the Group C match between Colombia and Ivory Coast, and the first knockout match between Brazil and Chile.