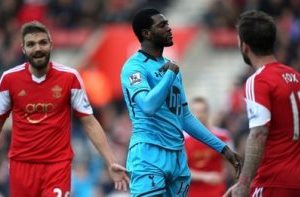 Spurs, who had Tim Sherwood in temporary charge after sacking Andre Villas-Boas on Monday, fell behind to Adam Lallana’s early 25-yard strike.

Adebayor’s close-range volley made it 1-1 and an unfortunate own goal from Jos Hooiveld put the visitors ahead.

But Saints striker Rickie Lambert levelled after fine play from Lallana, before Adebayor curled in the winner.

Tottenham won 2-1 away to Southampton last season but they have lost their five other matches at the St Mary’s Stadium without scoring.

Spurs are chasing a third successive win against Saints.

Saints kept six clean sheets in their first nine league games, but have failed to keep a shut-out in their subsequent seven matches.

They have failed to win their last five top-flight games (D2, L3). If they don’t beat Spurs it will equal their longest winless run under Mauricio Pochettino.

Southampton have not won any of the eight Premier League matches in which they conceded the opening goal this season (D5, L3).

He had a higher win percentage (53.7%) in Premier League matches than any other permanent Tottenham boss.

Spurs have failed to keep a clean sheet in their last six Premier League matches, conceding a total of 16 goals.

They have claimed 16 points from their eight away games this season. Prior to this weekend, that was the joint best record in the top flight (with Arsenal).