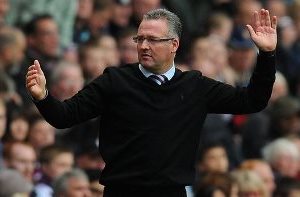 The away side has not won this fixture in the last 13 league and cup meetings since a 1-0 top-flight victory for Crystal Palace in September 1991.

The most recent fixture between the sides was an FA Cup fifth-round replay in February 2010 which Aston Villa won 3-1.

Villa have only earned 45 points from their last 46 Premier League matches at Villa Park, losing half of those fixtures (W11, D12, L23).

They have failed to score in four of their last five Premier League home games. Villa’s tally of six goals at home is the lowest in the division and they are the only side yet to score in the first half in front of their own fans.

Paul Lambert has won more away league games (eight) as manager of Aston Villa than he has at home (seven).

They have only led at half-time on two occasions, fewer than any other top-flight side bar Cardiff (none).

No team has picked up fewer away points than Crystal Palace this season (three, level with Sunderland).

They have only scored four goals in eight away matches.

Palace have followed up successive league wins with consecutive defeats.

According to Opta, they have the lowest average possession figure in the Premier League this season (40.3%). The team with the second lowest figure is Aston Villa (42.2%).