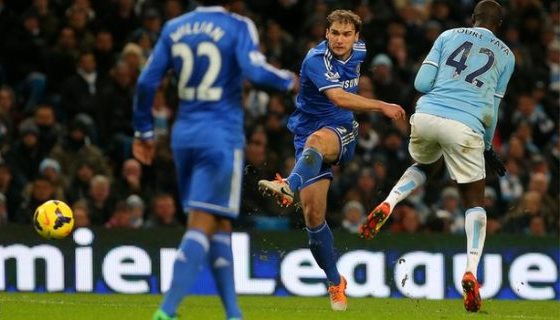 After the visitors dominated the first half, Ivanovic opened the scoring with a precise low shot from 20 yards out.

Samuel Eto’o, Nemanja Matic and Gary Cahill all hit the woodwork as Chelsea continued to look the better team.

David Silva and Stevan Jovetic had late chances, but Chelsea held on to draw level on points with City in second.

Manchester City have won the last four meetings against Chelsea at the Etihad, stretching back to the 2008-09 season – Carlos Tevez and Yaya Toure sealing a 2-0 win in the last of those fixtures.

Chelsea inflicted one of four away defeats on Manchester City in the Premier League earlier this season – winning 2-1 in late October – Andre Schurrle and Fernando Torres either side of Sergio Aguero’s leveller.

Manchester City have won eight games in a row in the league for the first time since 1946-47.

Edin Dzeko has scored four goals in the last five PL games for City – he has three in a row but has never scored four in a row since moving to England.

City have scored four or more goals in 14 league and cup matches this season in domestic and European football.

Alvaro Negredo has scored 16 goals in his last 13 competitive appearances at the Etihad Stadium.

Chelsea had won their last five games before drawing against West Ham in midweek.

A win would make Chelsea the first team to do the double over Manchester City in the PL since Everton in 2010-11.

They have only conceded 20 goals, the best record in the Premier League at present.

Jose Mourinho’s side have won four games from losing positions, more than any other PL team so far.