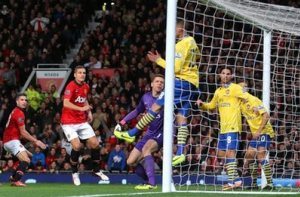 Manchester United put the brakes on Arsenal’s charge at the top of the table after Robin Van Persie’s strike gave them victory over their rivals.

United took the lead in the 27th minute when the Dutch striker rose above the Arsenal defence to head in Wayne Rooney’s corner from the left.

The result moves United up to fifth, five points behind Arsenal.