Crystal Palace 1-0 Watford
Crystal Palace earned their third successive victory thanks to an own goal by Watford’s Troy Deeney at Selhurst Park.

Everton 4-0 Hull City
Romelu Lukaku ended a week in which he turned down a lucrative new contract offer with two goals as Everton beat 10-man Hull City to move level on points with fifth-placed Arsenal.

Stoke City 1-2 Chelsea
Gary Cahill made up for conceding a penalty by scoring a late winner as Chelsea moved a step closer to the Premier League title with victory at Stoke.

Sunderland 0-0 Burnley
Bottom club Sunderland drifted further from safety with a draw at home to Burnley, whose wait for a first away win of the Premier League season continues.

West Ham United 2-3 Leicester City
Leicester City held on to claim their first Premier League away win of the season and further ease their relegation worries in a stirring victory over West Ham.

Bournemouth 2-0 Swansea City
Benik Afobe had a hand in both goals as Bournemouth moved nine points clear of the bottom three and added to Swansea’s relegation worries with victory over the Welsh club. 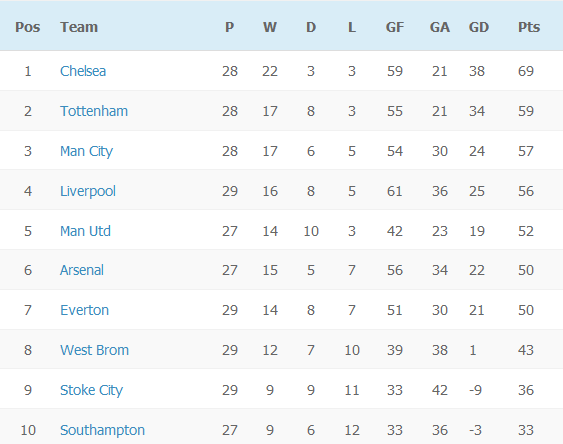