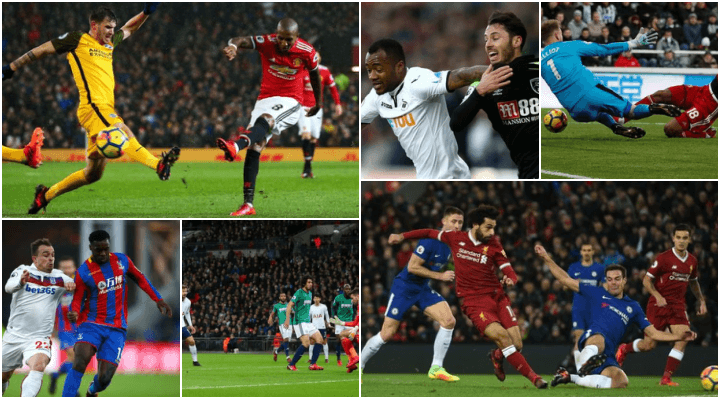 Leicester City had to settle for a battling point at the London Stadium after a scrappy encounter with relegation-threatened West Ham United.

City took an early lead through Marc Albrighton and had control of the game, until half time when their Achilles heel of conceding from corners haunted them again.

Cheikhou Kouyate headed home just before the break and no side in the Premier League has now conceded more from corners than City.

Salah, who left the Blues last year after a brief and unsuccessful spell at Stamford Bridge, raced onto Alex Oxlade-Chamberlain’s ball to side-foot home the opener in the second half.

It was Salah’s 10th goal in just 13 Premier League games this season in what has been an incredible start to the Egyptian’s Liverpool career.

Chelsea had beaten Qarabag 4-0 in the Champions League on Wednesday but showed only flashes of their attacking quality in this game.

But they got lucky in the closing stages when Willian’s apparent cross drifted over Simon Mignolet and into the back of the net.

Chelsea’s are unbeaten in their past six visits to Anfield, a run stretching back to 2012.

The French defender pounced after a scramble in the box, with Stoke defender Ryan Shawcross unable to clear Yohan Cabaye’s cross.

Roy Hodgson’s Eagles remain bottom of the table but are now only three points behind West Brom in 17th.

Xherdan Shaqiri’s fine solo goal lit up a subdued encounter and put the visitors in front on 53 minutes.

But Palace were level within two minutes through Ruben Loftus-Cheek, the England international taking advantage of lax defending to convert at the far post.

A heavily deflected Ashley Young shot was enough for Manchester United to seal an important 1-0 Premier League victory over Brighton at Old Trafford.

Brighton goalkeeper Matthew Ryan was in inspired form with a fine double save to keep the scores level going into half-time, but Young’s effort 24 minutes from time cannoned in off Lewis Dunk to see Jose Mourinho’s side keep the pressure on League leaders Man City despite an unimpressive display against the Seagulls.

Chris Hughton’s visitors finished the game the stronger of the two teams, but United’s weakened defence did just enough to hold on for three points to close the gap at the top of the table until Man City face Huddersfield on Sunday.

Watford condemned Newcastle to a fourth straight defeat with a comfortable away win at St James’ Park.

Will Hughes put Marco Silva’s side into the lead in the first half with a well-taken shot that went in off the post.

DeAndre Yedlin’s own goal doubled Watford’s advantage just before the break, and Andre Gray struck from close range on 62 minutes.

Newcastle’s fourth straight defeat sees them slip down to 13th in the table, while Watford’s fourth away win of the season leaves them in eighth.

Rafa Benitez’s side looked short of threat up front, with two efforts from Joselu their only shots on target.

Swansea City were unable to ease the pressure on manager Paul Clement as they drew with Bournemouth at the Liberty Stadium.

Spurs fell behind on four minutes as Jake Livermore played in Rondon, who nudged off Davinson Sanchez and rolled the ball past Hugo Lloris.

Manchester City fought back from a goal down to earn a 2-1 victory over Huddersfield Town and restore their eight-point lead in the Premier League title race.

City went into the game five points ahead of Manchester United, but Nicolas Otamendi’s own goal in first-half injury injury time saw the table toppers head into the interval behind to David Wagner’s impressive Terriers.

Unfortunately for Huddersfield, City came flying out of the traps after the break, with Raheem Sterling earning one of two penalty appeals for Sergio Aguero to pull his side level two minutes into the second half.

City pressed on for a winner, and found it fortuitously as goalkeeper Jonas Lossl saved Gabriel Jesus’ shot only for it to rebound off Sterling’s chest and loop into the empty net.

Rajiv van La Parra was shown a red card at the death for pushing Leroy Sane in the face, but City saw out the result for their 12th win in 13 League games to once again go eight points ahead of Jose Mourinho’s United.

Everton’s troubles under caretaker manager David Unsworth continued as they slumped to a heavy Premier League defeat at Southampton.

Saints striker Charlie Austin scored two second-half headers on his first league start of the season, after Dusan Tadic had given the hosts an early lead.

After Austin’s double, Steven Davis beat Jordan Pickford from the edge of the box to wrap up victory for the Saints, who had scored only six league goals at home this season before the game.